Flashback from ninety years ago

In October 1930, the first volume of Frontier News was published. In this Flashback from ninety years ago, we share with you snippets of stories and photos from the day.

On the cover of volume one is a sketch of the new Assembly Hall and offices on Margaret and York Streets, Sydney. The building opened on 8 September 1930, with the Australian Inland Mission (now known as Frontier Services) due to move in at the end of the year.

Something in the related article resonated with us – “For years we have been hampered by lack of space; now we are eagerly planning things bigger and better” – because while we wait for conditions to improve with the current climate, we are planning bigger and better things for our return to the bush!

An assembly of AIM staff 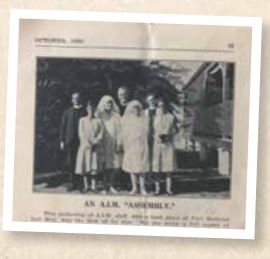 In Port Hedland, a rare gathering of AIM staff was captured on camera. We believe they met in the course of their duties, with Port Hedland being the turning point for two Remote Areas back in the day. Picture from left to right are Rev W Dorin, Mrs Dorin, Sister Baldwin, Rev J A Barber, Sister Colls, Rev P Somerville and Mrs Somerville. 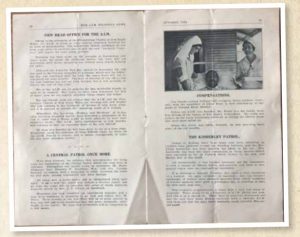 We shared two exciting announcements in our inaugural volume. The first was the resumption of our Centralian Remote Area in the new year. It had been in abeyance for quite some time. Today, it is served by our Bush Chaplain Benjamin Quilliam.

The second, was the success of our two-year ‘trial’ for the Aerial Medical Service better known as the Royal Flying Doctor Service today.

This article was adapted from the May 2020 edition of Frontier News.