In the dozen or so years Maree Anning has been an Outback Links volunteer,

our team estimates she has contributed more than 300 hours of unpaid service to farming families across Queensland.
But Maree doesn’t measure her volunteering in hours, or even in the number of placements she has
chalked up over the years.

For this dedicated volunteer, it’s all about connecting with people; about ‘mucking in’ and doing what needs to be done to help country folk out of hardship. In return, she says her volunteering has resulted in many lifelong friendships and plenty of adventurous travel experiences along the way.

Her most recent placement was with a farming family in Theodore, Queensland. “Mum and dad, Michelle
and Scott, had so much on their plate!” Maree says. They do, indeed.

The couple have three daughters:10-year-old twins Addison and Isabella and 8-year-old Sophia.

In between juggling family duties, they run a cattle property alongside horse and dog breeding operations. Scott also spends every second week working out at the mine and Michelle runs her own management consultancy as well as equestrian clinics.
“To say they have a lot of balls in the air is quite the understatement,” Maree told us.
Michelle reached out to Outback Links for support as she was snowed under with jobs coming out of the drought and Covid-19. She and her husband also wanted to get the house in order ahead of family visiting for Christmas.

Our intrepid volunteer was only too happy to help. Maree got into an easy routine with the family, helping the
girls out with their daily chores. “They put me on that roster quick-smart,” she said.

Maree’s duties involved everything from mucking out the horse stables 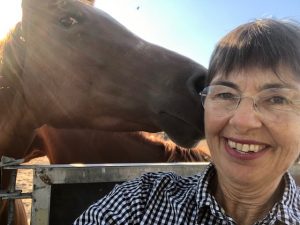 and feeding the sheep, to cleaning the dog kennels, tending to the puppies and walking the girls to the bus stop, a kilometer down
a dirt track. As well as helping to tidy up indoors, Maree also completed some special projects: sprucing up the outdoor patio and crafting a bench seat for the children to sit on while waiting for the school bus.

She initially intended to stay with the family for two weeks but extended to four weeks so Michelle could travel for work. While she slept in her motorhome parked beside the main house, Maree says she was very much part of the farming family’s daily life: sharing meals and helping in the kitchen when asked.
Maree told us that she loved the routine of the busy farm, and particularly enjoyed watching Farmer Scott work with his horses. “Scott was like a horse whisperer,” she said. “I could stand there for hours just watching him with those magnificent horses.”
Maree returned to her Gold Coast home following her 4-week stint with
the family, and she was delighted when they invited her back to join them for Christmas.

She regularly keeps in touch with the family and says she had no doubt that they will remain friends for life.
“That’s the beauty of volunteering for Outback Links,” Maree said.
“As much as you give, you get much more in return.”

You too can become a volunteer and change lives! Click HERE to register your interest.