Growing up with Grandma

Marj’s four grandchildren love growing up with grandma on their orchard, even when dealing with things no child should have to. For years now, Marj and her husband Ray have been the primary carers for their son’s children. All while barely getting through the toughest drought in 100 years and trying to make an income on stone fruit. The relationship between grandparent and grandchild is not typical in this household, but it is as rich and loving as any other.

“The kids love it here. They don’t want to leave here.”

A headmaster at Marj’s grandson;s school backs up this claim, recounting a time when he stated firmly, “I will never leave Nana.”

She attempts to explain what can only be described as love, “Well, he appreciates what we’ve done for him. And he loves what I do for him.”

Growing up with a heart condition

Marj speaks glowingly of her grandchildren’s character; their loving and compassionate nature. But she reveals how she worries about her grandaughter Zara, who struggles with a serious heart condition.

“She’s been through a lot of operations.”

“She’s good at the moment. She has a specialist appointment every year, and she’s got one more operation that (the specialist) doesn’t want to do till she’s 18. It’s replacing a valve in her heart and he wants it to be finished growing.”

“Some weeks are a big challenge for me, but I seem to get through it. I believe in the power of God. I believe, you know, in prayer. And that gets me through.”

While Marj plays the role of primary carer, Ray is hard at work doing everything he can to pay off debt that built up over the drought. He makes sure they have food on the table for the kids.

“Ray’s got to keep going to clothe them and look after them and do what we have to do for them mentally. He just works all the time.” 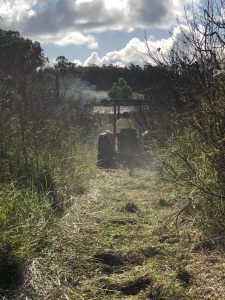 “The challenges we face every day; keeping going, having the energy to keep going.”

And even with the incredible bond they have as a family, it is never easy to take care of four children while trying to manage a sprawling property as Marj and Ray are getting on in age.

“You know, I get tired. I’m not young. I’ll admit I’m slower than I used to be. I get tired and the kids wear me down, but we get through it.”

Getting through the drought

As huge as the challenge is today, it was even greater through one of the worst droughts in Australian history. Marj and Ray remember how they barely scraped by.

“Look, you’ve got no idea what we went through. We were paying $200 every week just for a truck to bring water to drink.”

“We both got to the point where we couldn’t even look at each other, that’s how thirsty we were. So terrible and even now, we wonder how we got through it. But we did.”

“I’ve been here for 50 years and that was the worst drought ever experienced.”

Today, they are still paying back the debt after their income went backwards for years. Even as things pick up now, there is still a long way to go for recovery and the burden of raising four young children remains.

The impact of our volunteers

Not long after the drought, the couple got in touch with Frontier Services to see if there were volunteers who would be willing to help them pull through.

“We had the sense to ask for help,” Marj says.

When asked about the difference they made, she puts it in no uncertain terms.

“It’s the difference between us surviving and not surviving. As simple as that. We could not survive without them because Ray or I can only do so much, and we have to stop at what we can do. But getting that help, we’re able to do the whole lot of the trees we’ve got in production.” 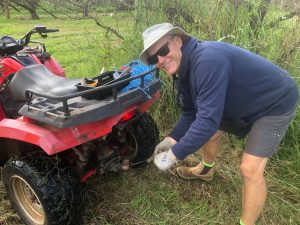 “I get really down when I get out of the bed with what I’ve got to do, I think, Oh, how am I going to do that? Hey, I’m not going to get all this done. And the volunteers come and I’m on top of the world because when they place, I think, oh, goodness me, all that done, I was all worrying about it.”

“And that’s the difference that it makes. Just that little bit of help. Everything that we’ve got to do so far, we are getting done, but only because we’re getting that help.”