Volunteers lifted our spirits: Megan has worked on her brother’s farm since 2003 and has had a really heart-breaking decade. Megan moved onto the farm in NSW with her brother to look after her sick parents. Sadly, they have since passed away and her biggest reminder of them is the farm.

Megan feels a huge connection to the land and it brought her to tears to see it all become nothing when the drought was at its worst. I could hear the sadness in Megan’s voice when she spoke about what has happened to the farming industry.

Although, it was lovely to hear a little perk in Megan’s voice when she spoke about the rain and how that has provided some hope for her and her brother.

“It really did lift our spirits and the whole community. Everyone was feeling a bit better and it was great to see the animals in good condition again. But it will be a long time ’til we are out of the woods,” she said.

Megan said that last year when times were really tough and she felt like giving up, her spirits were lifted with the QANTAS volunteers who were organised by Frontier Services. They camped in her neighbour’s backyard and brought much needed laughter to the farm.

All Megan felt for a long time was sadness until the volunteers came and lifted her spirits. I feel this really shows how vital our Frontier Services volunteers are.

“One of the biggest highlights in this terrible time was when Frontier Services organised the amazing QANTAS crew to come and help build fences for us and our neighbours. We camped out at night and ate food and chatted for hours. It was just so good for our souls,” Megan said.

Megan and her brother have struggled immensely with the hardship of the droughts and their mental health was at an all time low but she said that when the QANTAS volunteers came it brought such joy to their lives.

“It was a really beneficial time for us, both practically and as a mental health circuit breaker,” she said.

“We can’t thank Frontier Services enough for that incredible time. We will cherish it forever.” 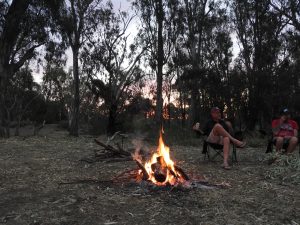 Just at a time that things started to look better, COVID-19 hit and really affected all farmers on multiple different fronts. Farmers are struggling financially, having to borrow money and live week to week, with demand for meat dropping with COVID-19 restaurant closures and the wool industry majorly affected by strained relationships with China. Our farmers also tell us and Bush Chaplains that since the lock-down finding the right products for crops and cattle has been impossible.

The rain brought hope to the farmers but COVID-19 came and shut that down.

“If there is one thing I couldn’t stress more it is to shop local and support organisations like Frontier Services!” said Megan.

I hope that we can continue to help people like Megan and her brother who were at an all time low until the Frontier Services volunteers stepped in.

This article is adapted from the August 2020 edition of Frontier News.